Justin Dyer is the director of the Kinder Institute on Constitutional Democracy at the University of Missouri. He is responsible for leading a vibrant, diverse community of scholars who share an academic interest in rigorously unpacking the complex history of constitutional democracy in the U.S. and around the globe. He is also one of the nation’s leading experts on the United States Constitution.

Dyer was recently featured on the Our Voices Matter podcast, hosted by Houston journalist Linda Lorelle. By coincidence, his episode was recorded on December 10, 2019, the same day the United States House of Representatives unveiled two articles of impeachment against U.S. President Donald Trump. Per the episode description, “during the conversation, he helps put the current political landscape into historical context and shares his hopes and fears for post-impeachment America, based on the document our founders created.”

Take a listen to the episode here or watch it below:

Over the past six months, we have highlighted the progress made along each of Houston’s Bayou Greenways as part of the Houston Parks Board’s Kinder Foundation-supported Bayou Greenways 2020 project. This is the sixth in the series of posts, all of which can be found here.

More than six years ago, the Houston Parks Board announced a $50 million catalyst gift from the Kinder Foundation to support the ambitious Bayou Greenways 2020 initiative. Construction began at the end of 2014, and since then, Houston Parks Board (HPB) and its partners Houston Parks and Recreation Department and Harris County Flood Control District have made remarkable progress.

Today, we take a look at Greens Bayou Greenway, the linear hike-and-bike trail in North Houston and lower Greens within the city limits. END_OF_DOCUMENT_TOKEN_TO_BE_REPLACED

Rice University’s Kinder Institute for Urban Research (KIUR) continues to extend the reach and impact of its work in Houston and beyond. 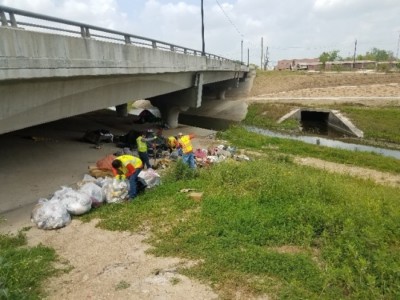 By the end of next year, 150 miles of trails will weave through 3,000 acres of Greater Houston’s greenspace, connecting residents to nature and each other. The Houston Parks Board has spent the past five years designing and constructing this network of trails which comprises the Bayou Greenways 2020 initiative.

But the work does not stop when the last trail is christened. The Houston Parks Board has and will continue to invest significant resources toward routine maintenance and conservation, ensuring the highest standard of safety, beauty and ecological integrity of the trails and bayou system’s riparian zones.

END_OF_DOCUMENT_TOKEN_TO_BE_REPLACED

In a series of blog posts throughout the year, we will highlight the progress made along each of Houston’s Bayou Greenways as part of the Houston Parks Board’s Kinder Foundation-supported Bayou Greenways 2020 project. This is the fourth in the series. 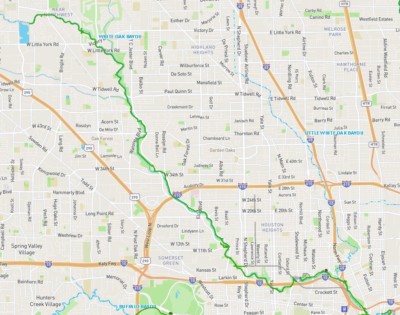 White Oak Bayou Greenway spans 16 miles. Starting at the bayou’s confluence with Buffalo Bayou at Allen’s Landing, the greenway heads upstream past UH Downtown, the Lionel Castillo Community Center, Stude Park, historic Olivewood Cemetery, TC Jester Park, and out to the Hollister Detention Basin at the city limits. It was the first Bayou Greenway trail to start and to ultimately be completed, in part because nearly 10 miles of existing trail by other entities had already helped set the Bayou Greenways precedent. To complete the greenway, the Houston Parks Board constructed the additional 6 miles of new trails – as well as 2 new bridges including a bridge over White Oak Bayou that connects the existing Heights Hike & Bike Trail to the Greenway. Funding for that bridge and part of the greenway was provided by the Memorial Heights Tax Incremental Zone. Major contributors to White Oak Bayou Greenway also included the Houston Endowment, Brown Foundation, Wortham Foundaton, Fondren Foundation, and a federal Transportation Investment Generating Economic Recovery grant. END_OF_DOCUMENT_TOKEN_TO_BE_REPLACED

Over the weekend, twelve Houston-area school teachers received the prestigious Kinder Excellence in Teaching Award (KETA) and a gift of $25,000 each in recognition of their outstanding work as educators.

Teachers from KIPP Texas Public Schools – Houston, YES Prep Public Schools, Teach for America Houston and Catholic Schools of the Archdiocese of Galveston – Houston were inducted into the KETA Hall of Fame alongside more than 250 other area educators. To date, Kinder Foundation has gifted over $3.7 million in grants since the program was established in 2001.

END_OF_DOCUMENT_TOKEN_TO_BE_REPLACED

In a series of blog posts throughout the year, we will highlight the progress made along each of Houston’s Bayou Greenways as part of the Houston Parks Board’s Kinder Foundation-supported Bayou Greenways 2020 project. This is the third in the series.

To date, more than one-and-a-half miles of Hunting Bayou Greenway have been completed. Portions of the greenway, which is located along Hunting Bayou in northeast Houston, will touch Hutcheson Park, Herman Brown Park, and Mickey Leland Memorial Park

Last month’s completion includes the replacement of an asphalt trail with a new 10-foot wide multi-use concrete trail north along West Hunting Street. Amenities including pocket parks, landscaping, benches, signage, trash and recycling receptacles, and native landscaping and tree plantings were added, as was a new bike/pedestrian bridge with overlook plazas connecting to the existing Hunting Bayou Greenway. Gateways along this new segment include the Pine Tree Trailhead at Mickey Leland Park and the Oak Hill Pocket Park near the new bridge. END_OF_DOCUMENT_TOKEN_TO_BE_REPLACED

Great strides in education are being made in our city, thanks in part to Good Reason Houston, an organization established with the belief that every child in every neighborhood deserves access to a high-quality education and a future filled with opportunity.

There are 900,000 children who call Harris County home. In August, our schools will receive letter grades from the Texas Education Agency. Assuming no significant changes, more than 300,000 students across Houston’s urban core will be learning in schools rated C, D or F. Knowing that we must do better for our students, Kinder Foundation, along with leaders from Houston Endowment, Greater Houston Partnership and H-E-B set out to change this.

END_OF_DOCUMENT_TOKEN_TO_BE_REPLACED

On June 8, Houston Parks Board (HPB) hosted a ribbon cutting to mark the completion of a new segment of Sims Bayou Greenway. The 2.6-mile stretch from Heatherbrook Drive to Buffalo Speedway connects into a previously completed trail segment that runs west to Hillcroft, and marks the latest achievement of the Houston Parks Board’s Bayou Greenways 2020 project. The Kinder Foundation contributed $934,000 to the $6.9 million total cost of this Greenway segment. In addition to the hike / bike trail, the segment features directional and educational signage, trash and recycling bins, benches, ornamental design features, landscaping, and a new trailhead entrance at South Post Oak Boulevard as well as other neighborhood gateway connections.  END_OF_DOCUMENT_TOKEN_TO_BE_REPLACED

Houston’s newest greenspace was dedicated with fanfare and camaraderie on Tuesday, May 28. A parade led by the Lawson Academy Marching Band welcomed more than 50 students, political leaders, community members and Kinder Foundation leadership to the opening celebration of the SPARK Park at Lawson Academy, a neighborhood park on the school’s Third Ward campus.